When I heard about the opportunity for a Banyan teammate to volunteer to go to Egbe and help rebuild the hospital, I was excited and honored to be asked.

But before I even could start my trip to Egbe I had to have five shots, including yellow fever, typhoid, hepatitis A and hepatitis B. I also had to take malaria fever medication with me, which I had to take every day and continue taking for the next three weeks.  I still have to go back for a fourth hepatitis shot next year.  After that I was ready to go.

Don, Sueanne and I departed from Miami International Airport, Thursday, August 11, 2011 to begin our trip to Egbe, Africa. We flew through Frankfurt and met up with the rest of our team, which included Moses and Christianah from London, Peter Haney from Portland, Oregon and Josh Lichty, Don’s nephew, from Canada. Together we all flew to Nigeria.

Upon arriving in Abuja, Nigeria I noticed how different it was from the States.  Motorcycles and worn down cars lined the streets. We were picked up by our driver and headed out on an eight hour drive to the city of Ebge over paved and dirt roads. It was nice to be out of the South Florida heat and enjoy the sun with a cool breeze. 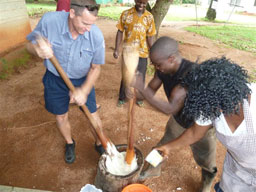 Egbe is located in a valley surrounded by mountains. It is a poor community, missing the larger factories and business that make up most American cities. Most businesses are run out of people’s homes and one of the largest facilities in the area is the Ebge Hospital. Everyone was friendly and welcoming and made it easy to feel at home.

Having been there since the early 50’s the years of use and natural elements had taken a toll on the hospital, and it looked like it needed some work, but we were there to help turn things around. The hospital is set up for around 100 beds with wings for ICU, Out Patient, Maternity, Eye Clinic, two operating rooms and an HIV/Aids Clinic. It was nice to see people coming and going and using the facility. Every morning people were lined up seeking help.  Also on the compound is a nursing school and a midwifery school.

We met with Mark and Abby Anderson who are currently the construction managers working with Samaritan’s Purse.  Mark and Abby are from Colorado and have been there for four months already and will stay and manage the

project for two years.  They had a list of projects and jobs that we needed to accomplish while in Egbe.

My main projects were to help oversee the construction of a new roof, upgrade electrical wiring in some houses, configure computers to allow them to print and scan, and unload the container that had been sent from Banyan two months ago. The container consisted of construction and landscaping tools for Mark and Abby as well as medical books for the hospital, a four wheeler and a Toyota Tacoma. All of these materials were donated by Banyan and other groups involved in the project. 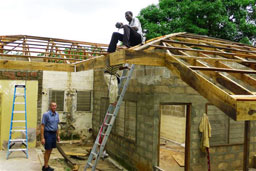 We stayed in Egbe for a total two weeks and accomplished significant improvements while there.  Although we did a lot of work, we also found time to explore the area. We took a few afternoons to do other things such as climb a few of the mountains and take a tour the town of Egbe.

Overall I enjoyed my trip to Egbe. It helped me realize how needed projects like this are around the world. It was a privilege to be the first Banyan teammate selected and I hope to have the opportunity to do it again.