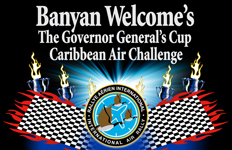 The Governor General’s Cup competition was established in 1953, by Right Honorable Charles Vincent Massey, First Canadian appointed Governor. The trophy awarded for this competition is one of the most prestigious of aviation awards. The competition challenges pilots in a variety of areas including aviation knowledge, flying skills, team work, and collaboration.

Banyan was proud to be the kick-off and finishing location for the Challenge.

If you are interested in next year’s Challenge or other Rallies in North America, visit the International Air Rally home page.