As a gateway FBO, it was an honor to be invited by the Bahamas Ministry of Tourism to participate in the 2009 FAM trip.  Here’s some of my notes from the trip.

On Thursday, August 20th, Don and Sueanne Campion and my husband, Pete, and I attended a briefing for the Bahamas FAM trip.   Thirty two people and eight aircraft were on their way to Grand Bahama Island for our first day’s adventure.  For me, this was only the second time in my life to fly in a small aircraft and the first time going to the Bahamas.   Pete and I had the pleasure of flying with Jack & Karaen McCormick in their 1970 Aero Commander 500.  Jack is the owner of Baja Bush Pilots and does group fly-ins to Mexico on a regular basis.  (He’s now planning fly-ins to the Bahamas.)

As the aircraft made it’s depature from Banyan, Don captured this aerial photo. 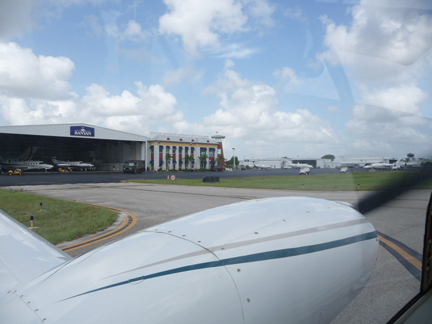 Don and Sueanne flew in an Aztec with Mark Steinburg pilot, and co-pilot Greg Rolle.

We arrived at Freeport and were graciously greeted by the local FBO and customs officials.  While waiting for all the pilots and their passengers to arrive, we talked to Kevin, a nice young 14 year old whose dream is to become a pilot.  He was hanging out at the airport just to see if he could talk a pilot into taking him for a ride.  Kevin was told to check out the AOPA.org website as well as to talk to the local FBOs to see if he could help pilots by washing their planes.  Kevin in turn told us about Grand Bahama Island and that horse back riding on the beach, swimming with the sting rays/sharks, and snorkeling were great things to do on the island.

When everyone had cleared Customs, ZNS Network video-tape reactions from the pilots for a news broadcast and asked the pilots about flying to the Bahamas. 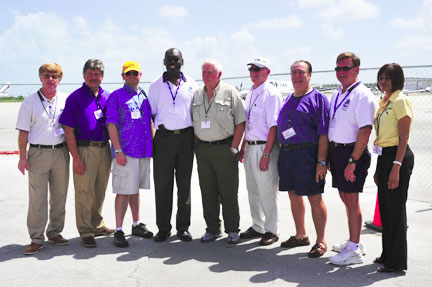 Here’s Don Campion being interviewed by the ZNS Network crew.

A bus transported us to Grand Bahamas Yacht Club for a round table discussion with Bahamas officials and a lunch of mutton or fish.    The discussion revolved around how to make flying to Grand Bahamas easier for pilots.  Many participants had suggestions and comments for the Bahamian officials on a variety of topics ranging from landing fees, to departure taxes. 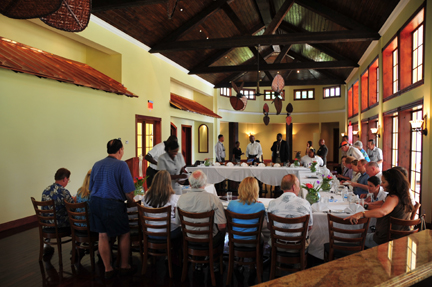 After lunch we were back at the airport headed for Long Island and beautiful Stella Maris.  Stay tuned for my next blog. N.B.