Today was the first day of the Familiarization Trip to the Bahamas, over 40 people with a total of 9 planes met at SheltAir at FLL. SheltAir provided a continental breakfast of juice, coffee, and bagels while Greg Rolle from the Bahamas Ministry of Tourism debriefed the group. Greg went over the plans for the trip, handed out name tags and agenda booklets. A representative from both SheltAir and the Bahamas Ministry of Tourism spoke to the group and after everyone had filed their eAPIS we were ready to go.

The flight was only about 45 min long, and we enjoyed perfect conditions. We landed in Freeport at the Grand Bahamas Airport and were greeted by a representative of the airport, line service technicians and a photographer. The line tech 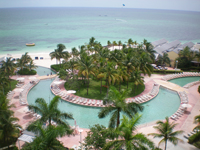 took our bags and after a few snap shots we were whisked off to Customs. Right outside of Customs the feel of the Bahamas was already in the air as we were greeted with Bahama Mamas and conch fitters. The passengers enjoyed the sun and music, while the pilots went inside to meet with Customs. After everyone went through Customs we boarded a bus to The Radisson Our Lucaya Resort.

The bus ride from the airport to the resort was short and the driver gave a nice overview of the island and what it had to offer for both pilots and tourists. Looking out the bus, you knew you were in the Bahamas. The houses were bright Caribbean colors of green, pink and blue. 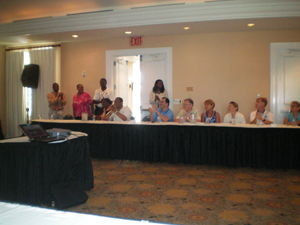 Upon arrival at the Radisson Our Lucaya Resort it was obvious that it was a five star hotel. Checking in was quick and simple and the resort representatives directed everyone to their rooms. We all received ocean view rooms and the view was spectacular. It over looked the horse shoe pool that ran up to the ocean front.

After a short detailed presentation from James Turner, the Commerical/Business Development Director for The 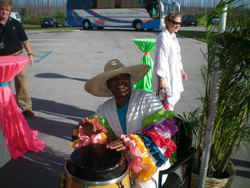 Grand Bahama Airport, about the island and all it has to offer, a number of the pilots/groups who lead fly-ins to the Bahamas had a lot to say about today’s reception at the airport. A number of concerns were addressed as well as a lot of positive feedback.

After the round table everyone was given about 1 ½ hours for leisure time so they could explore the island, sit by the pool, take a dip in the ocean or go shopping.

Everyone met back in the lobby later that afternoon to be transported to the Airport for a happy hour outside of thetower. We had the opportunity to tour the inside of the control tower, something that many of us had never had the chance to do before. The Grand Bahama Fire Department did a demonstration and everyone watched the sun set over the runway. 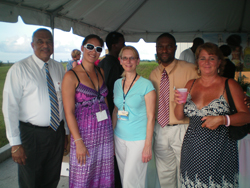 Then it was back to Port Lucaya for dinner at Luciano’s. Dinner was hosted by the Grand Bahamas Tourist Office and the Grand Bahama Promotion Board. The restaurant was excellent and the food was delicious. Everyone had a wonderful time and it gave everyone a chance to mingle.

After dinner several people chose to enjoy the night life, and others headed back to the hotel to rest up for an early start Friday morning.