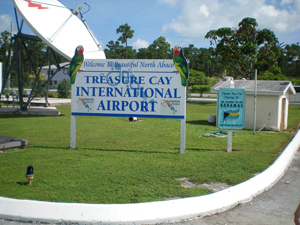 Today was the second day of the Bahamas FAM trip, and everyone met for breakfast around 7:30. Greg Rolle held a quick pilot’s de-briefing to prepare us for the next leg of the trip. He went over flight plans and requirements to ensure that all the pilots had everything they needed. After a quick breakfast everyone had about 2 hours before the bus arrived to take us back to the airport. People could either go to local shops or enjoy a morning walking along the beautiful beach!

Two hours went by too quickly and we were soon back on the bus and heading for Treasure Cay, Abaco. Watching everyone take off into the clear blue sky was something many people don’t get to see. By the time we landed at MYAT everyone was ready to take a break. We were met by Melinda Williams who broke us up into groups and put us on taxies that we took us over to a ferry. From there we took a short ferry ride to Green Turtle Cay. The water was cool, brilliantly blue and everyone was taking advantage of the beautiful photo opportunities.

If we thought Grand Bahama was amazing, pulling up to Green Turtle was breathtaking. The resort was in fact small 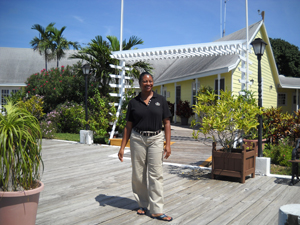 cottages that ran along the coast line. Each one over looked the beautiful bay. Entering the resort was like entering a page in a travel magazine and the resort representatives were friendly and helpful.

The rooms were adorable, each one designed to make you feel like your home away from home. Sadly, we only had about 30 minutes before we had to board the Prozac charter boat and take the 1 ½ hour long ride down the Abaco Out Island chain to Guana Cay.

The boat ride was beautiful. The water was warm and it was a great time to socialize and talk about past experiences in the Abacos. Pulling into Guana Cay was beautiful; tiny jelly fish were swimming all around the boat and fish were darting underneath the dock. We all got off the boat and began to make our way up to Nippers for lunch and drinks. 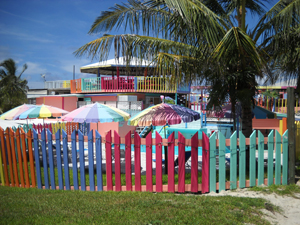 Nippers was a beautifully colored beach bar and grill. They had an outside bar with tables overlooking the beach and ocean with two swimming pools and a gift shop. They also had a restaurant where we ate lunch before we took the boat back to Breakers Cay, which was a beautiful private island.

Arriving back at Green Turtle, everyone made their way back to their rooms, where they got ready for happy hour and dinner at the resort’s restaurant. Molly McIntosh, the Director of Sales and Marketing, made sure that everything ran smoothly. During happy hour everyone gathered in the lounge area and watched a video of the last few years on the trip while dinner was being prepared.

After dinner, the pilots were given the opportunity to tell their “best” story and if the crowd liked it, they got a bottle of Fire in da Hole bottle of rum! All the pilots told great stories and before long everyone was laughing and having a wonderful time.

After dinner was leisure time. The Bahamas Ministry of Tourism had secured 10 golf carts for anyone who wanted to go into the town and explore. Even though it was late a few people chose to go into town and went to Pineapples for a few more drinks and some late night dancing, while others called it a night.

Everyone had wished that we would have had more time on the island. Many people had hoped they would have the opportunity to go diving with the world renowned Brendal Stevens from Brendal’s Dive Center…but time was already ticking by too fast!