A Smile Through the Tears – Yadissa’s Story 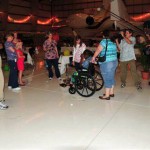 Although many lives were devastated by the earthquake that struck Haiti in January, those who survived it faced additional challenges. A young 11-year old girl named Yadissa was one of those who survived, and this is her story.

Yadissa and her family survived the earthquake, but because of the destruction around them, they had to look for the bare necessities to survive. While going to buy food, she was struck by a vehicle and suffered severe damage to her pelvis.

“She had walked five hours from her rural town into Port-au-Prince with $7 to buy supplies for her family,” said Tina O’Keeffe of Banyan Air Service.

Thanks to C.A.R.E., Yadissa was flown to Banyan at FXE and from there she was taken to Broward General Medical Center where she got the care that she needed.

After weeks of treatment, C.A.R.E. coordinated with Banyan to use of one their hangars to give Yadissa a going home party on Friday March 26th. Many people who helped Yadissa attended including Dr. Bonnell and his team from Broward General Medical Center, Peter Simpson the pilot who flew her to Banyan, C.A.R.E., and Banyan team members. The next day the GIV crew from Owens-Illinois Inc. flew her home.

Although there is still a lot of work that needs to be done it Haiti, a reunion of a daughter and her family will put a smile on the face of a few.

To watch the story of Yadissa’s landing in Fort Lauderdale visit WSVN-TV 7News, they were at Banyan the night she landed.

To learn more about C.A.R.E. visit their Facebook Page.

To learn more about Banyan become a Fan on Facebook.